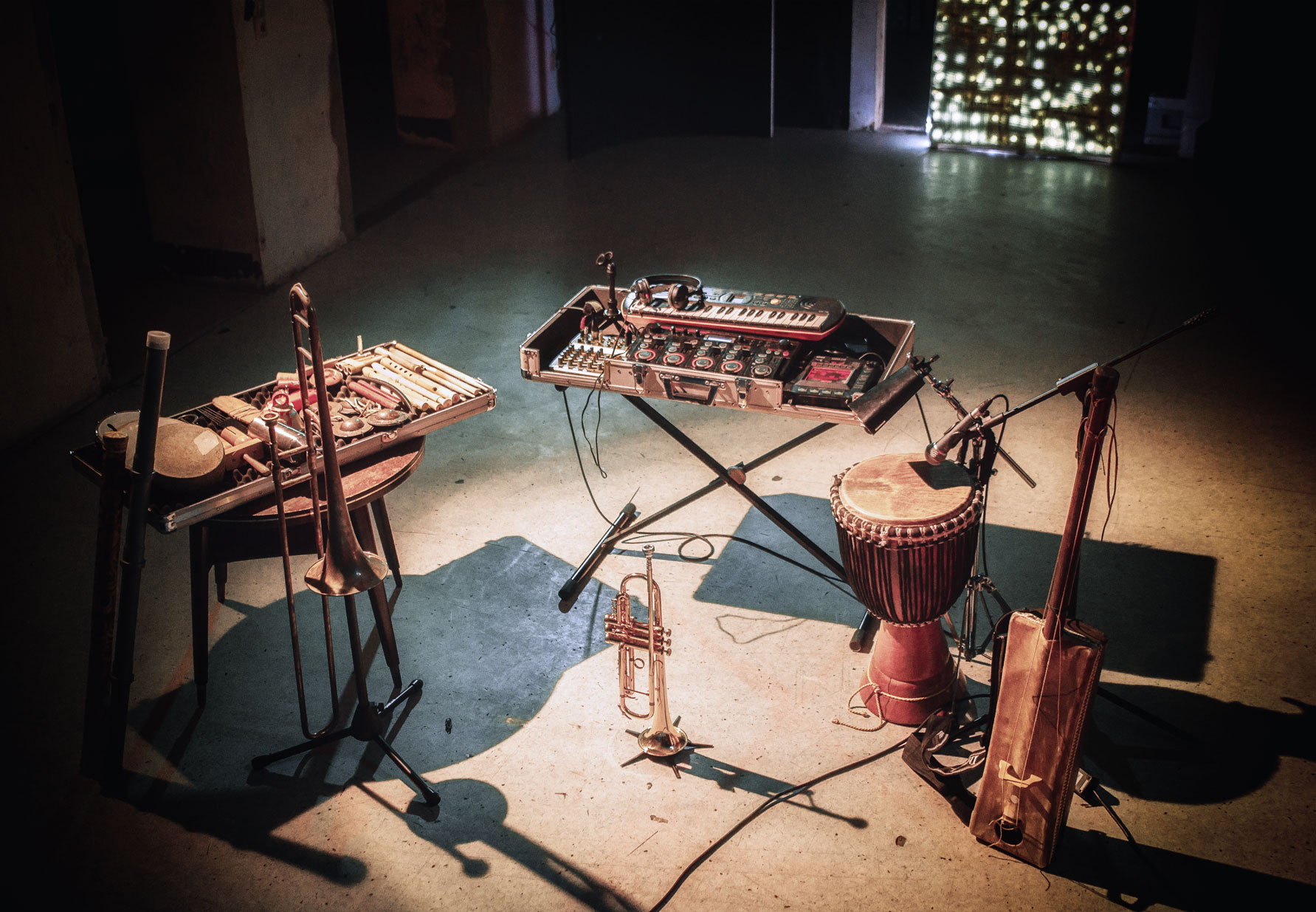 Trumpet:  What I love about the trumpet is its closeness to the voice but also the percussive posibilities of the instrument. To change the sound I can use various dampers. The Trombone is used by me more in a section context, or to underline the trumpet.

The first example is a section recording, the secondone the  jazztheme „Mr. Kenyatta“ the third a worldmusic kind trumpetsolo.

Didgeridoo: Circular breathing is a great thing. It´s a very healthy highly recomendable activity.  The constant sound is perfect as a drone, as in this example a soundscape of digeridoo, overtone and throatsinging for a theater production.

Guimarde: a drone instrument that exists worldwide in all possible constructions. I got this from Kazakhstan

Percussion During my stay in Madrid (2003-2005) I discovered the cajon. I was directly drawn to the variety of sounds of the instrument, that I decided to learn it. I play a Cajon Camarada, that has a more bassy sound.  In the world music band Triotonos around the guitarist Max Clouth, I primarly played the cajon .      In 2010 we toured India and recorded an EP.

Over the years, other percussion instruments have been added that I had mostly brought with me from trips, such as the djembe (Senegal), the darbouka (Turkey), talking drum and balafon (Burkina Faso), krakebs (Morocco), various rattles, shakers and Bells from all over the world. I am particularly interested in the polyrhythmic music of West Africa and its use in a ritual context.

In the meantime I have put together all percussion instruments similar to a drum set with and the cajon can be played as a bass drum too.

Here is an example of how the various instruments are combined in a LiveLoop setup.

I like to center the voice as the basis of all music. Using the voice as an instrument is a lot of fun. Because of my socialization with hip hop, when I was young, beatboxers had always almost fascinated me. That’s why I decided in 2009 with the appearance of the first tutorial videos to teach myself beatbox and to develop some of my own vocal percussion sounds.

Lately I’ve been adding the Dubler to my live set. A mic that converts voice and beatbox into midi signals. This enables complete sound aesthetics to be controlled with the voice.

I got to know the Guimbri when I was studying trance rituals in Morocco. The driving bass patterns of the Gnawa are incredible. All other string instruments such as the Ngoni (Burkina Faso) or the Kobyz (Kazakhstan) came from a similar interest. What fascinates me about the Ngoni is the wonderfully harmonious patterns that you can play with it. The Kobyz has a haunting monotonous sound that comes from a shamanic background. The krar (Ethiopia) is similar to an ancient lyra and can be tuned in different ways. I use the ukulele as a harmonious extra when doing live looping

Wind As my first instrument I began to learn the flute  I kept this line and taught myself various blowing techniques over the years. Here is a selection of different instruments such as a self-made bamboo flute, an ocarina from Northern Italy, a Saz Surnay from Kazakhstan, a ney from a crutch or a nose flute. Each of these flutes has its own beautiful sound and can be used for certain atmospheres like in this example of a soundscape of a beginning scene in a theater piece

Zurna: I brought this instrument  from a trip to Turkey in 2009. I later found out that this is also one of the oldest concepts of how to create sound. In a ritual context, the penetrating sound can help to provoke certain states of consciousness, such as the brotherhood of Hamadsha in Morocco doing Sufi practices.

Saxophone: In 2018 I got a saxophone. The fingerings are similar to the flute, the approach is different from brass instruments, but the knowledge of the zurna helped to produce sound with this instrument very quickly. Here a cheesy saxophon intro for a scene in a theater production